Brady Hoke As a Do Better Attitude For The Michigan Wolverines 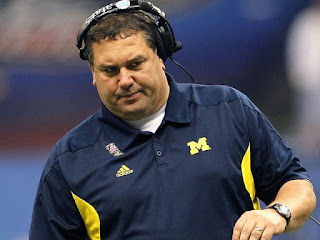 Brady Hoke is not okay with the Michigan Wolverines season that they had and he hopes to do better each week for next season. If you are a Michigan fan which I am, I’m excited for a few reasons one is that Michigan had a winning season and two they have a coach that will light a fire on anyone’s ass that plays for him.

That’s a good sign for next season, it would be awesome to see them in the hunt for a shot at the national title but I think we saw Michigan’s play with their first game for the national title. But I think Brady Hoke will have the program humming in a few years. He is right 8 wins is not enough for Michigan they need 10, I think to be taken serious with college football.

Its like what Kanye West says in the song with 2 Chainz – Birthday Song, “Last birthday she got you a new sweater Put it on, give her a kiss, and tell her do better.” Now I am not going to kiss Michigan football you might find some fans that will but I’m just going to put the UofM sweater on and tell them, do better. Every fan wants the team to and so does the coach. GOBLUE!

Previous Story:
Chip Kelly The New Philadelphia Eagles Head Coach
Next Story:
Why The 49ers Are Going To Lose The Super Bowl