Brian Kelly Is Talking With The Eagles 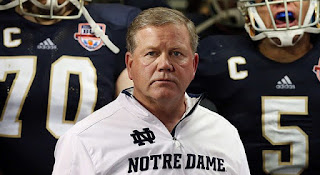 Brian Kelly is using the flirtation with the NFL as a bargaining tool but he is taking it to the brink. The Notre Dame coach interviewed with the Eagles on Tuesday and they have a second interview scheduled for this weekend. I don’t know if Brian Kelly is NFL bound but that would suck for college football has Notre Dame is still ranked number 1 according to BCS computers.

Kelly has no idea what its like to coach at the NFL level do you think he is beyond his skill set going to the NFL? The Eagles are really pushing to get Brian Kelly to coach but he first wants to know how a NFL coach job differs from the college job he has now.

Not to open a can of worms but I think if he had beat Alabama he would have a better foundation for talking with the NFL about open jobs. But he was blown out by Alabama. No offense to the Fighting Irish I loved seeing them in the national title game but Brian Kelly should stay at the college ranks and work on his skills for the NFL, sorry coach.