Colin Kaepernick Will Be A Tall Task For The ATL Falcons 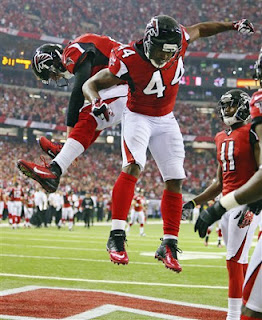 Kaepernick is a very mobile QB and can crush you with rushing yards as they proved with 181 yards against the Green Bay Packers. 90% of the yards that the 49ers recieved was with Kaepernick running the ball and he was untouched.

With this kind of QB it should put the ATL Falcons on high alert. They know what they have to do and that is beat Kaepernick when he runs. If they can contain him it should be a good game. Also if the Falcons can keep Kaepernick in the pocket he won’t be much of a threat.

I just want to say this we will have a great game to watch this Sunday, if ATL plans their defensive game right.