Could Tim Tebow End Up A Chicago Bear 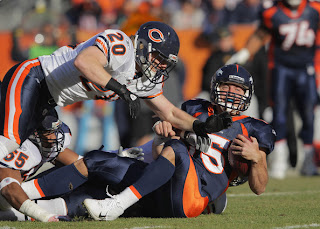 Now wouldn’t this be fitting for Tim Tebow or as I like to call him “baby Tebow” that he will be Jay Cutlers back up next season. It can happen, I honestly don’t think Chicago is the place for Tim; he needs to be somewhere warm so that he can sit on the bench and work on his tan.

But whose to say he won’t throw the football I mean he would be going to the weakest division in the NFL, no disrespect to my Detroit Lions. So it might be good to be in a weaker division because if the Bears can blow out a team like the Lions Tebow will get to play more. It might just be a few games here and there but playing time is playing time.

From what the Bears did to the Detroit Lions last season I think he might play, but that’s only if history repeats itself.

Hey, look at it this way the Chicago Bears have better chance of making a playoff run than the New York Jets do. We will see if the Bears bite on the baby Tebow bait that is out there. We might see “Te-Bears” trending soon or in a theater near you, that is some of the funniest sh*t I have seen in a while. But I personal like carl’s nick name for Tim Tebow, T-boners.