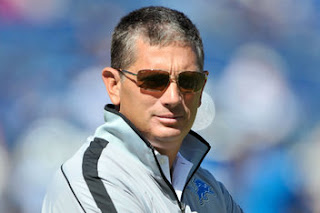 The Detroit Lions are a joke in my opinion, they blow more 4th quarter leads than any other team in the NFL. I mean if you have the ball for the last 2 minutes of the game and your up by 3 because your kicker Jason Hanson has a foot on him, don’t do a 30 second 3 an out. That’s the stupidest thing about watching the Detroit Lions.

But the things that the Detroit Lions need to change for next season is one get a running back that is big and can bust some heads and gain some yardage. You can only rely on Matt Stafford for so long, if you want to have a running game get a running back. Maybe Vick will come to Detroit, its highly unlikely but there is always hope. I think Michael Vick will be leaving the Eagles nest soon, Sorry.

Among the other things that can change is maybe look for a new head coach if you start the season 0-2, but that all starts with management, I will get there later. Suh’s attitude needs  adjusting a bit. I mean I like his fire and that’s what the Detroit Lions need is fire.

Now on to the management you will not see a winning football team back to back in Detroit until the Ford family sells the team. Lets face it the football team sucks and you have an owner that has one or maybe two good players to sell seats. I hate to say it but I like Mike Illitch’s way of doing business he isn’t scared to spend money on his teams even through they went bust.