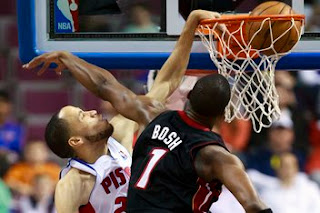 Yes, the Detroit Pistons still suck after losing to the Miami Heat last night and blowing a 2nd half lead against the Chicago Bulls they just down right suck. I don’t know if its Lawrence Frank or the Pistons. Lawrence Frank the head coach did have a hard time when he coached the New Jersey Nets.

It almost has if the Pistons are a good team but they don’t know how to finish a game, kinda like the Detroit Lions in every game. They have the lead until the last 2 minutes of the game. I remember when the Detroit Pistons used to be the best 3rd quarter team in the NBA and just blow teams out. That was when Detroit had Chancey Billups, Richard Hamiltion, Ben Wallace, Rasheed Wallace and the only one left the Palace Prince.

Detroit can play ball but they can’t finish games anymore and that’s to bad for Lawrence Frank. People have been talking about the Pistons making the playoffs and their 10 games out so well see. But, you should be happy that the Cav’s are in their division holding last place at 12-32.

Previous Story:
Michigan Weather Destroys Pontiac Silverdome
Next Story:
Normal Baseball Fan And Than There Is Me