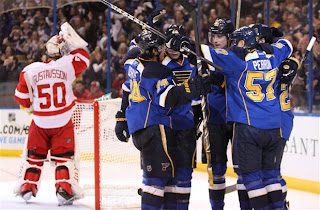 Well this is a bold thing to say from Jamie Samuelsen, here is what Jamie had to say.  I guess I will take your word for it Jamie, but the Red Wings have something to prove tonight against the Columbus Blue Jackets after getting smack around by the St. Blues. What a season opener that was, it blew harder than cheese and rice.

I hope the Detroit Red Wings don’t blow chunks like they did Saturday, their defense better have a good showing for the sake of Hockey Town. We already have the Detroit Lions that blow worst than a cold shower.

I have a lil’ faith in tonight’s showing on the ice. Like I said I am going to take Jamie’s word for it, Saturday was game 1. If they lose tonight I’m going to hit the showers, remember its only a 48 game season. However, it does suck having to start the hockey season on the road but themes the rules.

I’m kind of excited to see who the Red Wings will pick up before the trade deadline on April 3rd but rumor has it that the wings might be sellers instead of buyers. Ahh dang, I like when Mike Illitch spends money.

If this season is a rebuilding year for the Red Wings which I think it is after losing Nick Lidstrom to retirement. I still have Detroit Tigers Baseball to look forward too. Twenty-one days until pitchers and catcher report. But, we will see if the Red Wings and the Blue Jackets have dingier of a game or not.