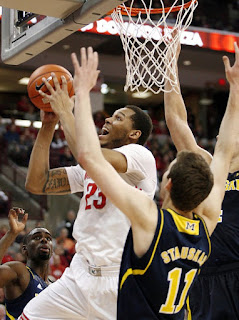 Michigan’s dreams fell short again in Columbus Ohio. University of Michigan lost a close one to Ohio State, giving Michigan there first lost of the season and it had to be against the bitter sweet rival Ohio State. The Wolverines lost 56-53 it was a close one on Sunday.

That makes Michigan 16-1 overall and 3-1 in the conference. Nine turnovers — as many as the Wolverines average for a whole game — turned into 16 OSU points. A nearly 7-minute scoring drought and a 16-0 Ohio State run. Burke and Tim Hardaway Jr. combined for only eight points. And little-used backup point guard Spike Albrecht was the leading U-M scorer at halftime with seven points.

I hate to see Michigan lose to a rival like Ohio State but they are still having a kick ass season.