Why The 49ers Are Going To Lose The Super Bowl 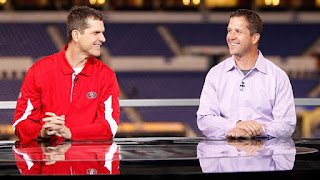 The 49ers have a baby of a coach the way Jim Harbaugh presents himself on the football field even if he stands on the sidelines is like a 6 year old boy. I do hope that the Ravens beat the Patiots, I believe that Jim Harbaugh is a competitive guy but has no respect for anyone. Its sad to see him on the sidelines acting like a monkey.

If the Ravens do win I hope they shut the 49ers and Jim Harbaugh up hard. I have never like the coach because of how he carries himself with football. I just remember that Jim’s brother coaches the Ravens so that would be great time to throw your lil’ bro around on the football field.

In Writing this article the Patiots have a 10-7 lead over the Ravens but its only the first half. I believe that having respect for the game and for the atheltes that play the game is the #1 rule that all NFL coaches should and  I just don’t see it in Jim Harbaugh has a head coach. Jim, I hope your brother kicks your ass. I will be watching if John Harbaugh goes to the Super Bowl. If not, there is always beyonce which she didn’t make my hottest girls of the 21st century.