Will Dwight Howard Stay In LA? 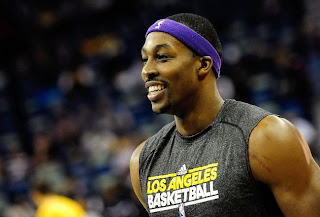 There are  a lot of rumors rolling around that Dwight Howard will be leaving LA after this season. The Lakers need help and to make the playoffs it might be a pray to god. Kobe looks like he is already planning for next season. If you seen the game last night against the Celtics and yes it was kind of a blow out.

Congrats to KG for 25k points in his career one of the best two way players in the NBA. Back to the Lakers they suck and its not because they don’t have good players they just have no leader right now in a coach.

I bet Howard likes LA but the same thing is happening in LA as it was in Orlando, give the guy a break hes playing hurt and there is a lot of sloppy play for the Lakers maybe they need fresh legs?

Previous Story:
Gasol Out For Six Weeks
Next Story:
Illinois Center Meyers Get A Surprise From His Brother