Why Binge Watch The Ranch on Netflix sucks

Recently I have been watching the ranch on Netflix.com. I finished watching it last week I think.

IT’S A great show i would recommend it you’re an Ashton kutcher fan you will like.

it took me the 10 episodes to finally figure out that the show is based in Colorado.

But the bad news is that IT’S going to take about 6-8 for the new season to hit Netflix.

I guess that’s why it sucks to binge watch Netflix on the weekend. 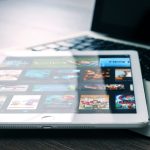 Next Story:
The Pitfalls of Watching Grey’s Anatomy on Netflix