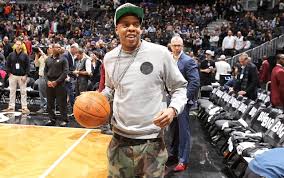 Is Jay-z made to be a NBA agent I guess he’s going to try his hand at it as he sells his portion of the New Jersey Nets. According to Yahoo Jay-Z sold his less than 1% of the Nets to take on being an agent for the NBA.

Jay-Z did this for the future of his business in the NBA. I don’t know if he is cut out for the NBA prospects but who wouldn’t want to say that Jay-Z is their agent in the game of basketball. We will have to see how this new venture will treat Jay-Z.

Jay-Z had to sell his stock in the Nets to become certified for being an agent in the NBA, those are the rules of the NBA.  Jay-Z is starting to make a name for himself in the NBA with marketing NBA2k13 and now he wants more of the pie.